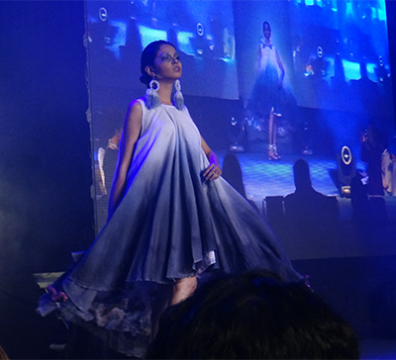 Manila, Philippines – February 2, 2016 – Mass-produced fast fashion is the second most environment-damaging industry in the entire world, only next to the oil industry. With this in mind, Aboitiz Foundation Scholars, supported by Aboitiz Equity Ventures, Inc., sought to revolutionize the fashion industry, so that it championed sustainability and the 3Rs (Reduce, Reuse, Recycle) advocacy—thus, the Green Fashion Revolution was born.

Last January 30, 2016 at the SMX Convention Center in SM Aura, Bonifacio Global City in Taguig, audiences from all ages attended the first ever Green Fashion Revolution (GFR) in Manila. The Green Fasion Revolution is an intercollegiate fashion show that displays the artistic use of recycled materials to create eco-friendly designs. It is an initiative under Aboitiz’s Wealth on Waste Program, which promotes the use of recycled materials by breathing new life into them.

For its past three cycles held in Cebu, the GFR has brought together young people with both flair for fashion and love for our environment. Trained and educated about the sustainable side of fashion, these young designers were given the materials and opportunity to create collections reflecting their respective environmental advocacies.

Yhol Colegado, Corporate Branding and Communication Officer of Aboitiz Equity Ventures, explained the importance of the GFR: “We will be able to tell the students that their waste materials have something to do with the environment. If you don’t make use of it, it will create negative impacts because it’s already disposed of in the rivers. It has effects, like flood from just a little rain.”

“We feel that we should start them young,” said Malou Marasigan, Aboitiz’s VP for Reputation Management, whose department spearheaded the GFR. She talked about how the youth will one day become influencers in their respective professions and social circles. “We also need to use different venues,” she explained on why they chose fashion as the event’s platform. “The Millennials have a different way of thinking. Most of the time, they ask: ‘What is the purpose behind things?’ That’s why we also want to use different channels, so we can really engage them … at the end of the day, it’s really about making more people aware.” Marasigan also mentioned how the winning students were given further opportunities to pursue sustainable fashion when they provided them with resources to develop and implement their own CSR program.

The GFR wouldn’t be complete without its socially involved participants. Jamie Naval, a senior BS Clothing Technology student from the University of the Philippines Diliman, talked about the link between industries and the environment: “Our theme is consumerism. We want to highlight that most of the trash we get is from the cost of consumerism, which is from the supermarkets, the local markets. The things we buy are the trash that accumulates later on.”

Another participant, Ding Parado of Asia Pacific College’s Multimedia Arts program, called attention to another issue brought to light by green fashion: “We want to raise awareness on the decreasing farmers in the Philippines since rice is one of our top industries. We wanted to make something that would make farming appealing to younger generations.”

GFR 2016 kicked off with a video showing the past three cycles of GFR and the social influence they carried. Hosts Dave Devilles, Corporate Branding and Communications Manager of Aboitiz Equity Ventures, and Paula Ruelan, Reputation Management Officer of City Savings Bank, then opened the program by welcoming the guests and introducing Aboitiz’s Cleanergy Park program, an initiative to preserve the habitats of pawikan (Hawksbill sea turtles) and ensure their growth and survival. Both GFR and Cleanergy Park are both part of Aboitiz’s BetterWorld mindset, which is one of the focus areas under their Planet sustainability clause. In fact, the hosts also took the opportunity to discuss the BetterWorld mindset and roused the audience to raise both hands and form a wide circle—the BetterWorld sign.

The stage then turned into a runway for the three participating universities and colleges: De La Salle – College of St. Benilde (DLS-CSB), University of the Philippines Diliman (UPD), and Asia Pacific College (APC). Fashion student or not, the participants showed equal prowess in designing and crafting fashionable and strikingly evocative pieces out of recyclable materials such as katsa, paper, used wood, and tarpaulins. 211kg worth of waste materials were distributed to the contestants—each was able to transform these old scraps into completely new fashion pieces, setting examples of excellent reusing and recycling.

After much deliberation, the Grand Champion was announced—De La Salle College of St. Benilde emerged victorious. “We wanted to tackle an environmental problem and we chose water pollution. The collection goes from whites and blues and transcends to something darker and darker. We want people to see that this is what we are doing to our environment, our waters. We are slowly affecting them one by one. We are disrupting the system,” said Ammiel Avena of DLS-CSB. She further described how their collection, titled Eiron after the Greek word for irony, consisted of clothes you would wear near the beach, yet they depicted water pollution.

Final announcements were made and cheers, merriment, and newfound awareness lifted the crowd’s spirits. “I will always be supportive of anything that’s natural and Philippine-made,” noted Director Celia Elumba of the Philippine Textile Research Institute, endorsing the successful GFR as a good sustainability initiative.

Green Fashion Revolution 2016 is only the first among many future cycles in Manila. Through this milestone, Aboitiz and all supporters of sustainability have taken another step in crafting a better world through the sustainable revolution of industries. 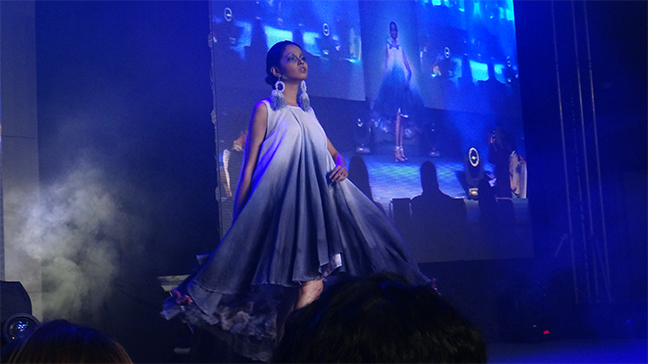